Congratulations to Leatherhead Swimming Club’s Stuart McCrea who has been selected as county team coach for the 2022-23 and 2023-24 cycles. 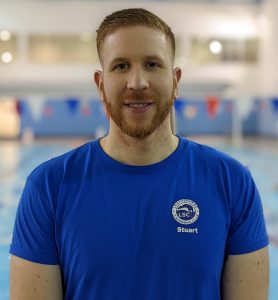 His responsibilities over the next two years will include coaching the swimmers for the National County Team Championships (expected to return later this year) and lead coach at the county development camps for 11-year-olds, under the new national programme.

Stuart joined Leatherhead SC from a young age, firstly as a competitive swimmer and then progressing to a coaching role in his latter competitive years.

In his current role, he leads the club’s regional and national development squads, working with some of the best ‘age group’ swimmers.

Stuart said that from early on in his coaching career he had always looked for additional experiences, including opportunities within Swim England’s talent and pathway programmes.

He started as a skills coach back in 2015 and has been coaching on talent programmes every year since. In 2018 he was appointed [South East] regional head coach.

More recently he was one of 24 coaches to be selected nationally across all the aquatic disciplines onto the Performance Pathway Programme.

Stuart said that having the opportunity to work and share ideas with other coaches and elite athletes from different backgrounds had helped him grow a better understanding of the ever-evolving sport.

He said: “Drawing from my experiences as a competitive swimmer and working with and alongside some of the best coaches in the country have helped me grow and develop as a coach, which in turn I have brought into my home programme.

“As a coach, my main aim is to see the swimmers succeed as individuals and to see them develop as athletes whilst enjoying what they do.

“I am looking forward to my time as Surrey team coach and to work and learn alongside the next group of coaches.”