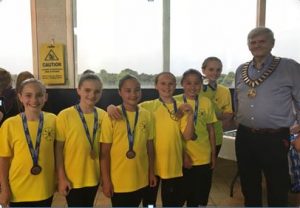 Despite some tough opposition, every swimmer came away with a medal. No mean feat!

First to swim were the Swordfish team who were competing in their first-ever competition (Annabel Sagar, Emily O’Neill, Erin Hartney, Erin Vickers, Tabitha Dwyer and Teagan Hartney). The girls have only been training for a couple of months, but put in an outstanding swim to finish third and take the bronze.

Next up were the Dolphin team (Carys Bruce-Caddick, Celia Thompson, Darci Whiting, Emily Watson, Josie Ridley-Smith, Katie Wallace, Lucia Chadburn and Nicola Pritchard). As the Power Rangers music began to play, the audience knew they were in for something special. The girls did a fantastic swim, walking away with the silver medal. Their hard work had paid off. 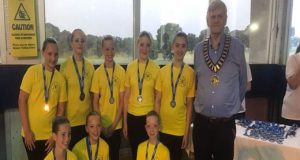 In addition to competing in the team event, Carys and Emily also competed in the 15 & under Duet section. In their pink and white costumes, the girls swam their way to gold. Kingston were the champions.

The Aurora team were the last junior squad to compete (Holly Powel, Ellie Holland, Livy Crow and Olivia Farr). Competing in the 13-18 year age group, there were some amazing lifts – some of the best seen from all clubs across all the age groups. The Auroras earned a well-deserved silver medal.

The Masters section of the competition was next (Rachael Stevens, Lucy Whatley, Laura Lindley, Louise Chambers, Ciara Rooney, Chloe Fletcher and Katie Holland). Rachael and Lucy competed in the Solo sections. With their high boosts and artistic arm movements, the girls finished third and fourth respectively.

The team won gold in the team event, with Laura and Louise also scooping a silver for their witches’ duet. The Kingston team achieved their overall goal of being crowned the London Masters Champions, winning the coveted Dawn Zajac Trophy.

Many congratulations. It wasn’t easy, but they did it.

Thanks to Surrey County ASA president Richard Willis for showing his support and presenting the medals on the day.