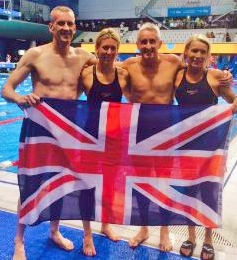 County masters organiser Jim Boucher said there was plenty to appreciate and feel good about in masters swimming.

He said: “This world record is a truly amazing breakthrough, not just for Surrey, but for Great Britain.

“The world scene has only really seen, in earlier years, our elders winning medals.

“But Mike as well as other clubs up and down the country are making the breakthrough in very, very competitive age groups and events.”

Hodgson also set a new European record in the 50m butterfly – clocking in at 26.56sec – and took silver in the 100m butterfly and 200m breaststroke.

On the final day of events at the Duna Arena, he topped it off with a win in the 50m breaststroke – in a world-record time of 30.26sec – while team-mate Michelle Ware (40/44) claimed silver in the 50m backstroke.

The full results are available here.