The Vivienne and Leonard Cherriman Award is an annual award, presented by the British Masters Committee to ‘the person or organisation who or which has done the most to promote and foster the cause of Masters swimming in Great Britain.’ Nominations run from 1st February to 31st January the following year and are welcomed from England, Scotland and Wales.

The 2017 winner was the indomitable Professor Sue Arrowsmith, from Nottingham Leander, who devoted so much of her own precious time to taking the hierarchy of British Swimming and LEN (European Governing Body of Swimming) Masters to task for the disgraceful organisation of the 2016 European Masters held in the London Aquatic Centre in May 2016. Surrey Masters are pleased to see her efforts rewarded with this National recognition. 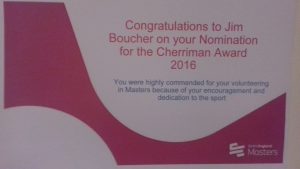 Masters Organiser Jim Boucher (Guildford City) who was highly commended for his work at County, Regional and National Masters levels.  Jim was delighted to learn of this nomination, and even more delighted to discover he di 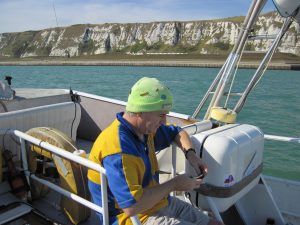 d not have to assume English citizenship to qualify for it, saying “Sue Arrowsmith turned up on the doorstep of BS and LEN, refusing to be put off with corporate-speak and meaningless apologies. She proved that we Masters have a breadth of talent and endeavour that must be harnessed to meet our OWN objectives and is a most worthy winner of this award (really!)”.