Even in her reign at the top of World Masters Swimming, Kings Cormorants’ Jane Asher has some years that are better than others. And 2016 has to one of her best years. Moving up into the 85-89 years age-group (age is only a number in the words of her esteemed colleague John Harrison), Jane has set about re-writing the Record Books like an authoress up against a publisher’s deadline.

Delighting the audience and her fellow swimmers wherever she swims, she has set long and short course records in many pools up and down the country during 2016. From topping the podium at the European Masters, the British and ASA Championships, and our own Surrey Championships, Jane’s smile and wonderful personality have shone even more than the gold around her neck.

It will come as no surprise to her fans, many of us in Surrey, that Jane was awarded the ASA Performance Athlete of the Year for Masters Award. We congratulate a true superstar on a superb year and wish her all the best for 2017. 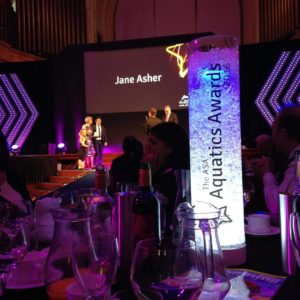