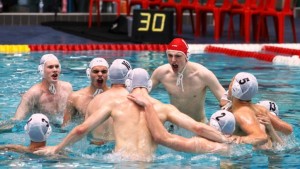 Croydon Amphibians U19’s Water polo Team put in a heroic performance at the weekend in the National Age Group finals, but just fell short of claiming the title by the narrowest of margins losing 4-5 to favourites Manchester.

Croydon Amphibians U19’s Water polo Team put in a heroic performance at the weekend in the National Age Group finals, but just fell short of claiming the title by the narrowest of margins losing 4-5 to favourites Manchester.

Croydon Amphibians had progressed to the finals unbeaten but knew their greatest test was still to come by playing the previous year’s runners-up Manchester with an partisan home crowd at the Manchester Aquatic Centre.

Both finalists had earned their place in the final as the two best teams by easily beating their semi final opponents. Croydon beat Exeter (14 – 6) and Manchester beating Lancaster (10 – 3).

Croydon got off to a great start with Matt Helps scoring the opening goal, having stolen the ball in defence. However Manchester replied almost instantly to level the scores at the end of the first quarter. Great goalkeeping by both keepers especially Croydon’s Peter Deutsch kept the 2nd quarter a tight affair but an inspired spell of Croydon team interplay set up Ashley Castle to score two goals.

The third and fourth quarters saw a resurgent Manchester pull back three goals to only one further goal from Croydon level the scores 4-4 going into the last two minutes. As Manchester tested a Croydon’s defence, that has been their strength throughout the tournament, mounting a series of attacks upon a tiring Croydon team the home crowd sensed the opportunity for victory .With just over a minute to go a penalty was awarded to Manchester which they converted. With less than 30 seconds to play a Manchester player was excluded meaning Croydon had a few precious seconds to play with a man-up advantage. They were however not able to capitalise on this and Manchester’s celebrations on the final whistle showed their relief at winning a hard fought and entertaining final 5-4.

Afterwards the Coaching team of Cliff Brooks and Mickey Helps said “It’s been a privilege to work with such a talented bunch of lads. They have performed so well, conducting themselves with distinction throughout the tournament. This is the premier competition in the country for the Juniors and we hope they realise what a great achievement they have been part of after once they can see past the obvious disappointment they must currently feel for just missing out on the Title”